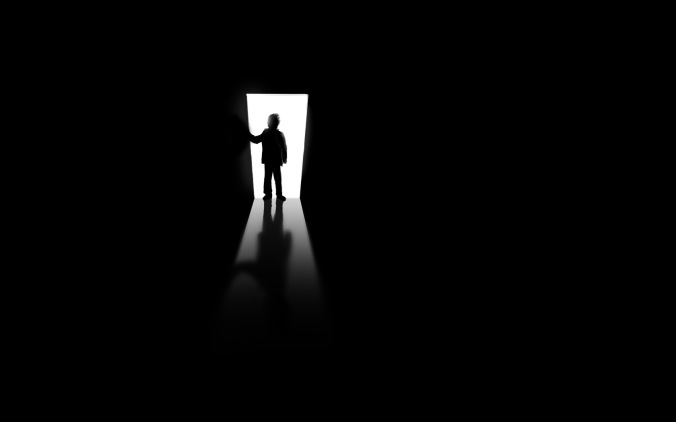 I felt invisible eyes following my every movement while I stepped into the unknown. Fear coursed through my body as I observed where I was and where I was going. I was in a vast, endless elevator and I felt very protective. Then I realized the presence of my 4 year old daughter was with me. We were descending down from a very high level. What I had gathered, was that we were coming down from higher dimensions or realms to the 3rd dimension, back into our waking bodies. I recall exiting many floors before, and now exiting onto another one. My daughter and I looked as the elevator doors opened. It was a large and spacious darkened room made of white marble stone. We stepped onto a narrow walkway with a drop off on both sides, It looked dark and endless. The walk way led to a broader part of the room. You could see the glint of the stone and how it shined as if there was a moon above reflecting off of it. The doors to the elevator instantly closed behind us and my heart pounded in panic, feeling trapped and afraid. My daughter wept, as I wept in silence as well. I saw a light to another elevator to my right as someone else got off. They stood there seeming to just stare and observe where they were. I tried calling but felt I knew they wouldn’t be able to hear me. They turned around and continued their own mission in the elevator they traveled on. Silence became almost louder than noise itself. I felt dread and that I was forever lost until the elevator doors opened behind me. I sprinted inside of and clung to the light that now surrounded me. Finally making it down to earth I exited the elevator onto a large land of dry dusty dirt. I somehow knew my truck was there waiting for me. “Where did my daughter go?” I thought to myself. I walked up to the truck to climb in and take us home, but behind the driver’s seat was a huge wonky eyed chicken sitting in my daughter’s car seat. I cried for an answer as to what this meant, what was going on- I then thought to myself, “How am I to go home without getting pecked to death by this chicken with a large pointy beak?” All of a sudden I became aware that this chicken would not harm me.
Then I woke up.